Last Summer we held the Planks Grassroots Tour across some of the UK’s best dry-slope and indoor snow facilities, they were a tremendous success to say the least! They were jam packed with coaching, jam sessions and endless fun with people shredding and having a blast with their friends. Last winter we had Woodsy’s Store Tour which was also a big success. So, we decided to combine the two together bringing the Grassroots Tour to the French Alps… and present to you The Grassroots Tour De France! We had Woodsy, Lupe Hagearty, Mike Rowlands and Row Emery take over the mountains with coaching, jam sessions, prizes, BBQs, signing sessions, after parties and plenty of good vibes. We travelled to four of the most popular resorts in France, each a home to one of our stores, Méribel, Val d’Isere, Tignes and Morzine. The weather didn’t necessarily play ball for most of the tour, but we still had a blast with the local seasonaires, sendy grom-skis and everyone else that was plucked from the piste to join the action. 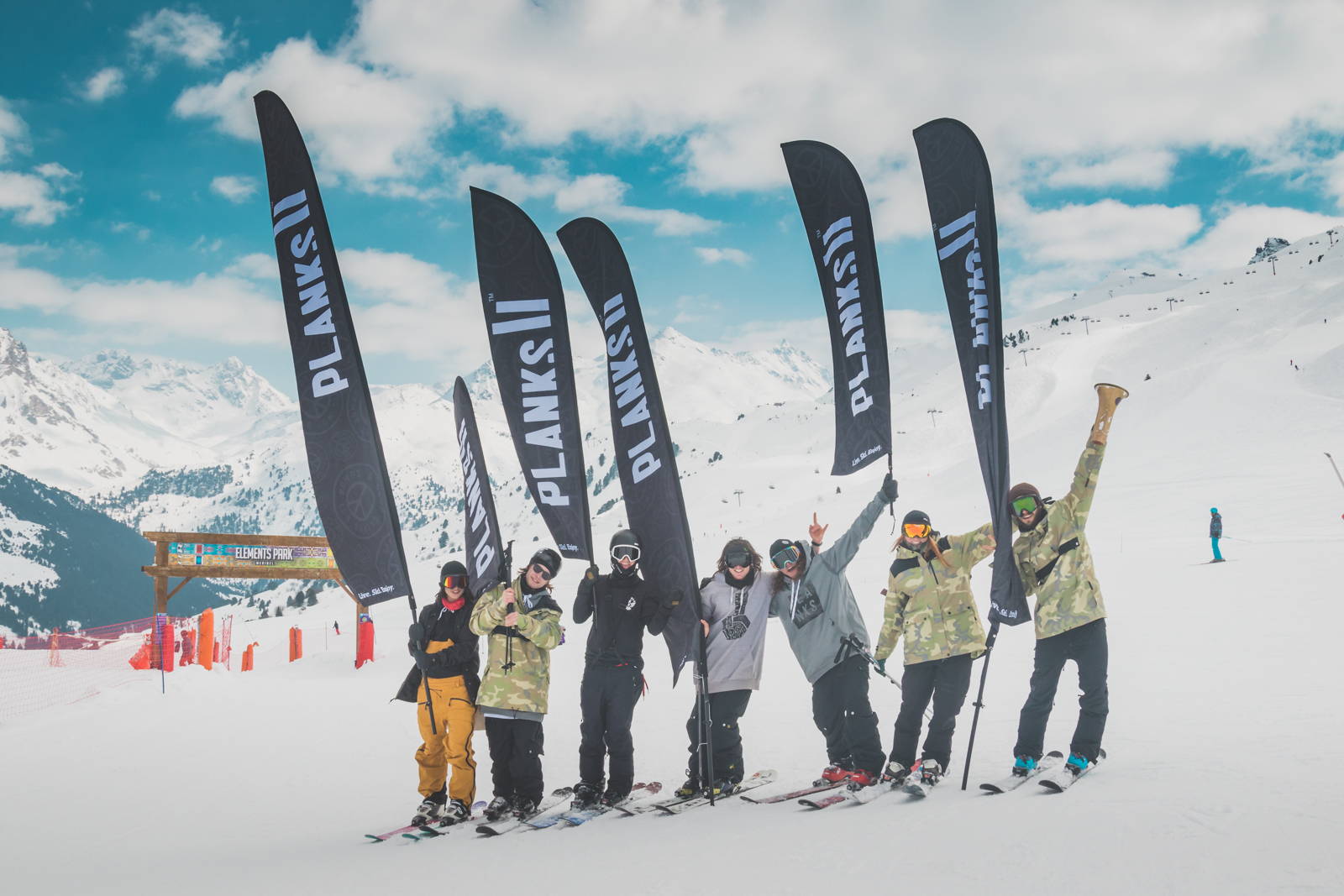 The first stop of the tour was Méribel, the crew arrived in resort and were welcomed with nothing but bluebird conditions to kick things off! After an awesome party at the Brewer’s Den the night before, we made our way up to the Elements Park, where we started the day off with some coaching sessions. There were plenty of seasonaires getting after it, sliding their first rails and boxes, the enthusiasm of everyone involved was sky high. After the coaching session everyone gathered at the top of the park for a BBQ in the sun. We were blessed with perfect spring conditions into the afternoon and it was soon t-shirt weather, or for Woodsy no t-shirt weather… 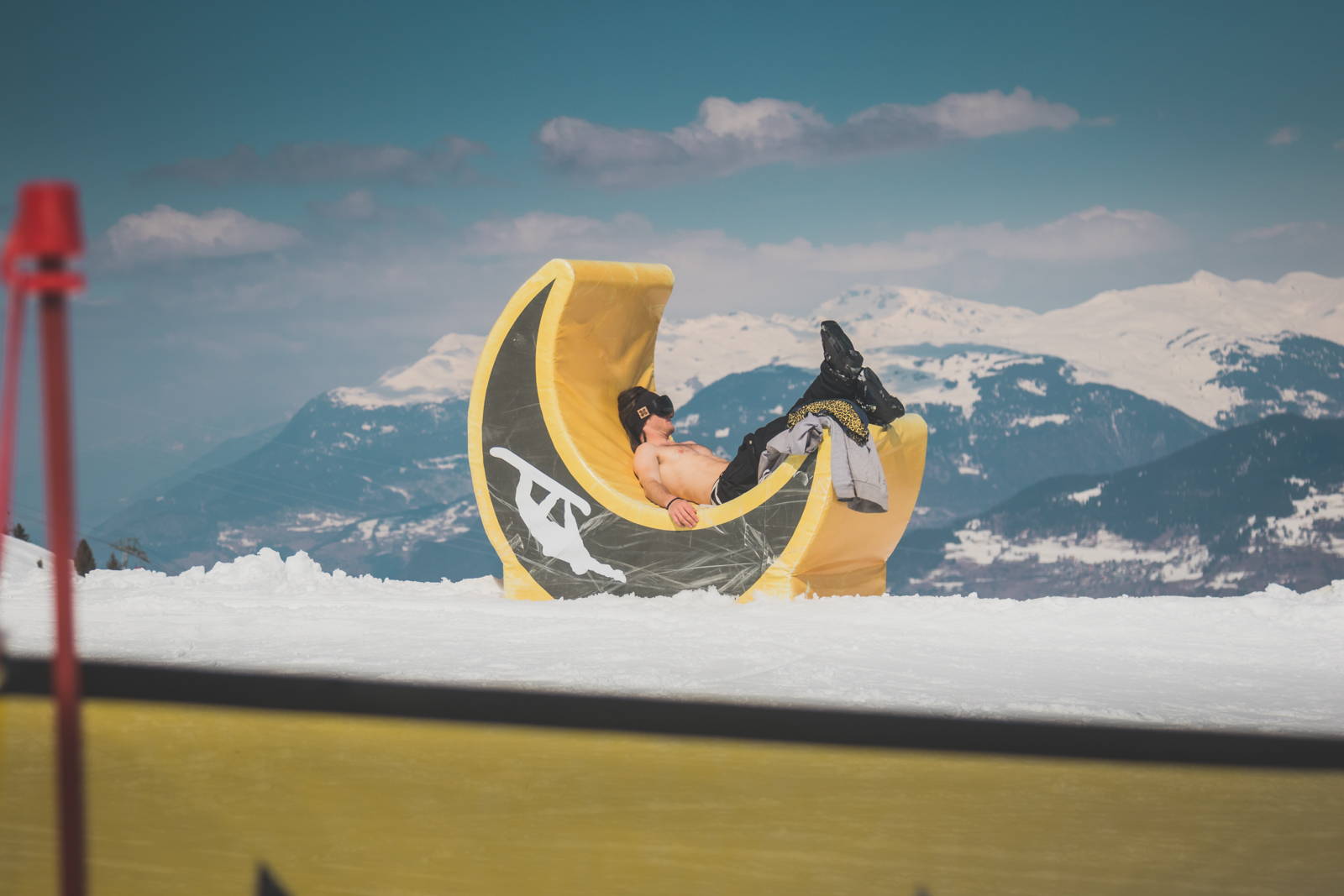 Woodsy soaking up the rays | Photo credit to Gwilym Thomas

After the BBQ everyone swarmed back to the park to get the first jam session of the tour underway. The Planks athletes lead the way by hiking the features at the top of the park to get the laps flowing. As passers by saw the action they were soon getting involved, with Woodsy on hand to show them how to do their first box slides. The heavens opened and everyone received a shower of Planks Clothing goodies for impressing the judges. Then came the French locals, with a real display of interesting stunts and rail wizardry, as demonstrated bellow… 👇 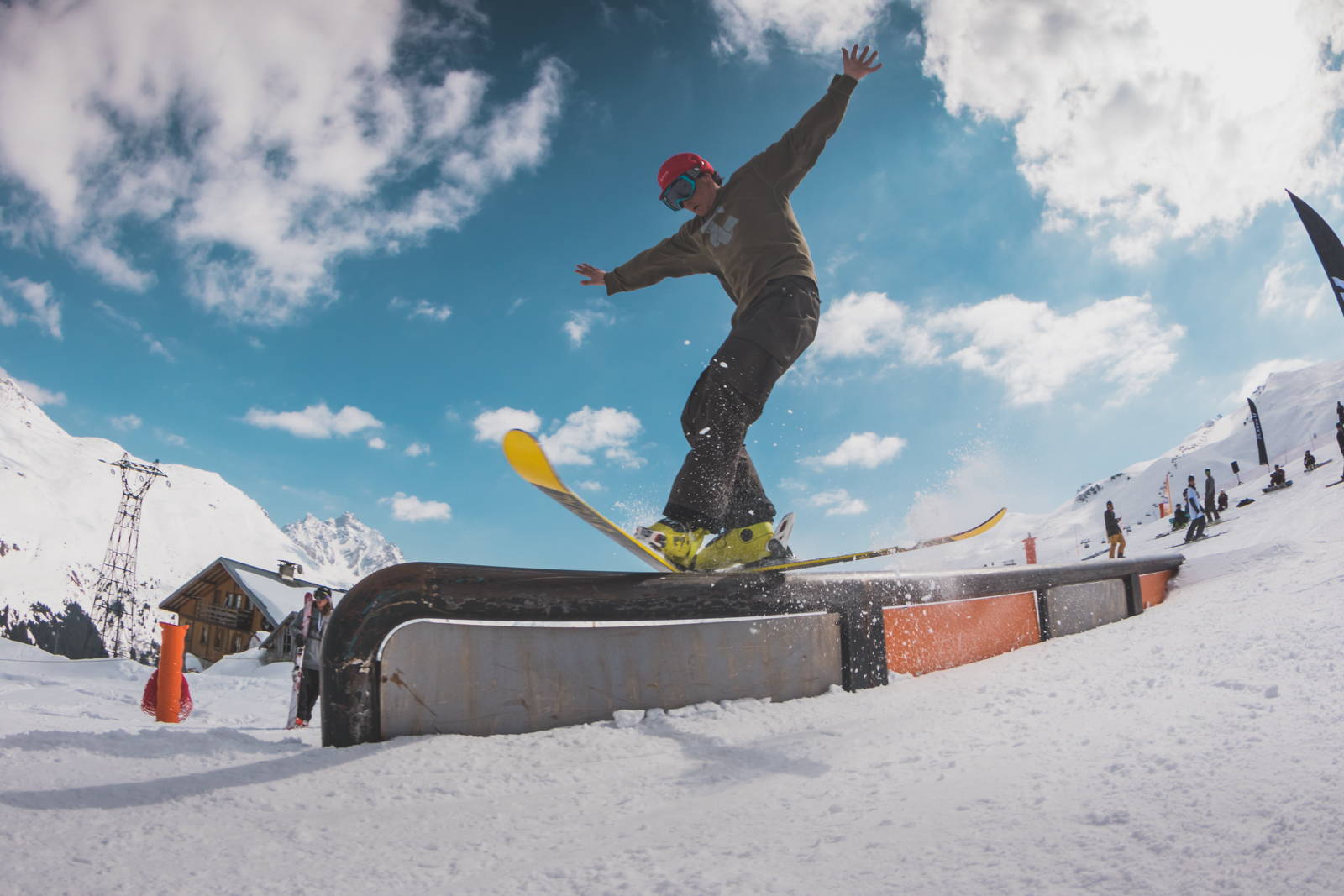 No words for this one... and no knees either | Photo credit to Gwilym Thomas

Later that night the crew made a visit to Fall Line Bar in Val d’Isere for the Planks party, the turnout great and the music was next level. Woodsy got behind the bar and began pouring pints for the fans, then the powder hound himself Biggie came to join in with the Fall Line groove, apparently he’s a regular. 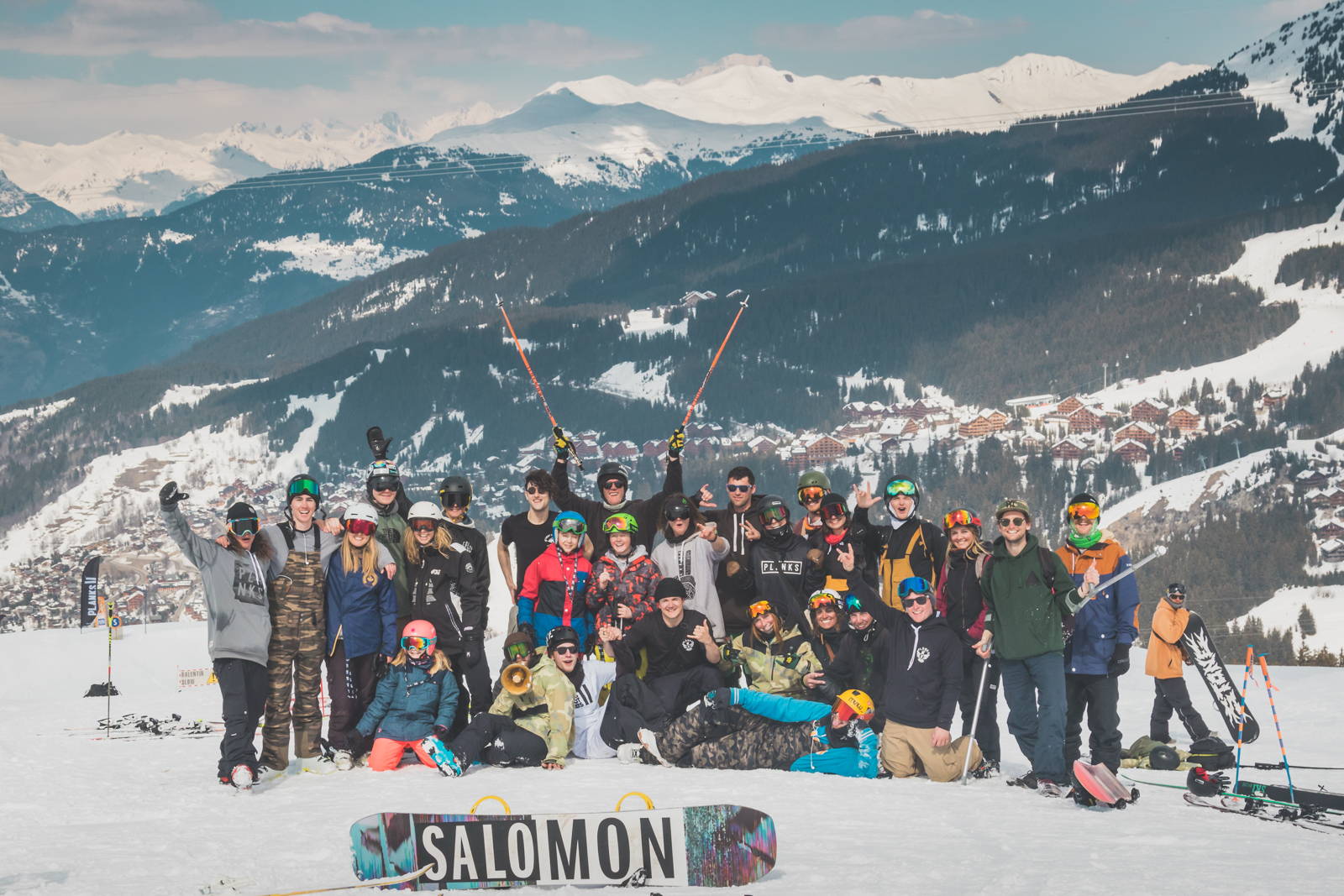 The second stop of the tour was Tignes, the weather looked hopeful in the morning with a few breaks in the clouds. We were all praying to the ski gods for yet another bluebird day like Méribel, only time would tell… To start the day right we had breakfast pies and berry-tactic smoothies from the number one pre-ski pitstop that is Planks Clothing & Coffee in Val Claret, Tignes. Afterwards we made our way up the chair lift towards the park. It was a long cold lift in white-out conditions, however, we arrived at the event tent and everyone was waiting to get sending. We began the day with some coaching sessions, Lupe and Row took the more experienced skiers up and down the rail garden, while Mike and Woodsy took the less experienced skiers to the beginner park. Woodsy was encouraging every passer by to enter the park and join in with the coaching, before long they had a huge group of beginners dabbling in their first ever freestyle experience, and they were loving it! 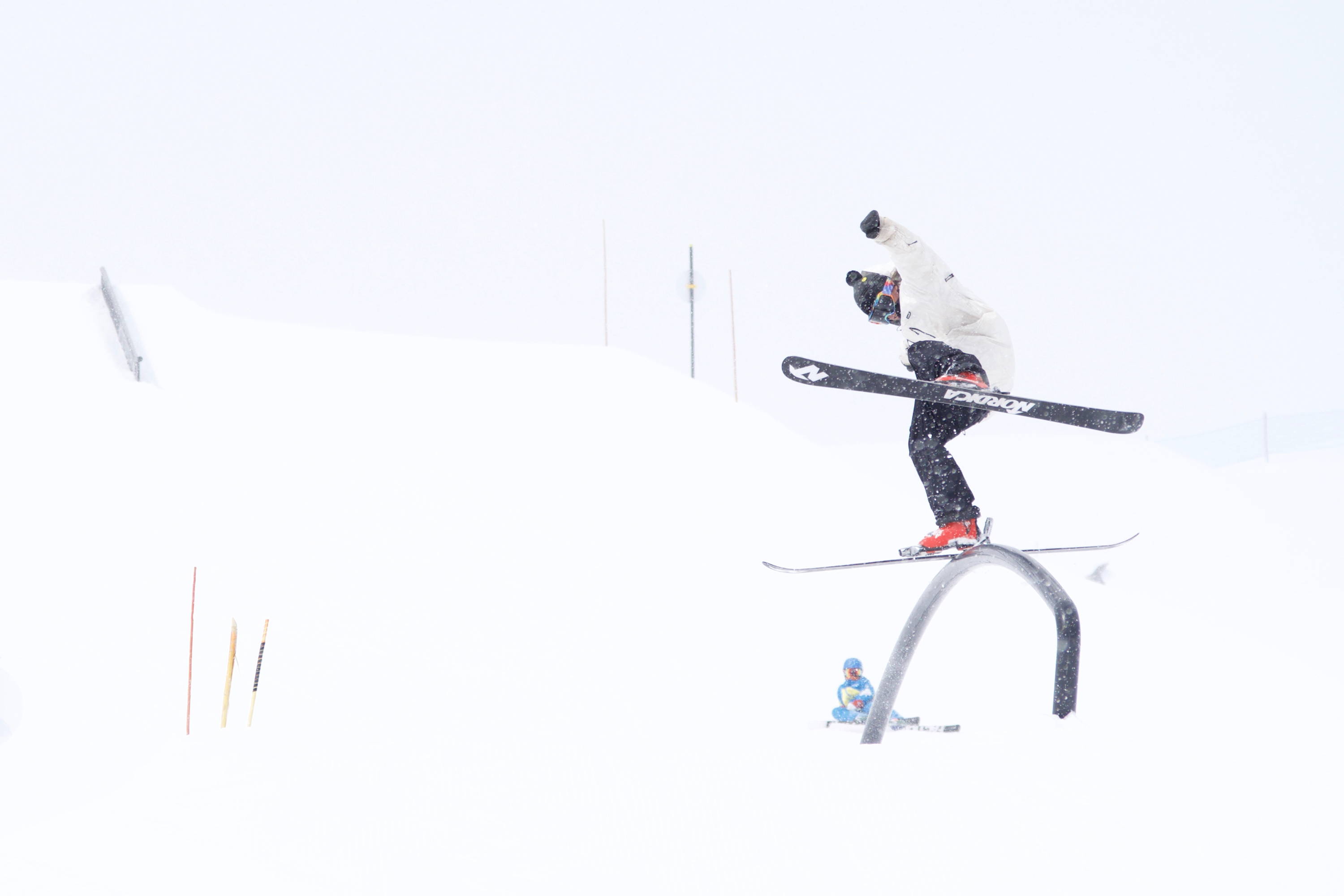 Everyone then gathered at the event tent for yet another BBQ, at this point it was clear that the turnout was insane and way beyond what we all expected as a result of such poor weather. Music was pumping and everyone was getting ready for the jam session that was to follow. 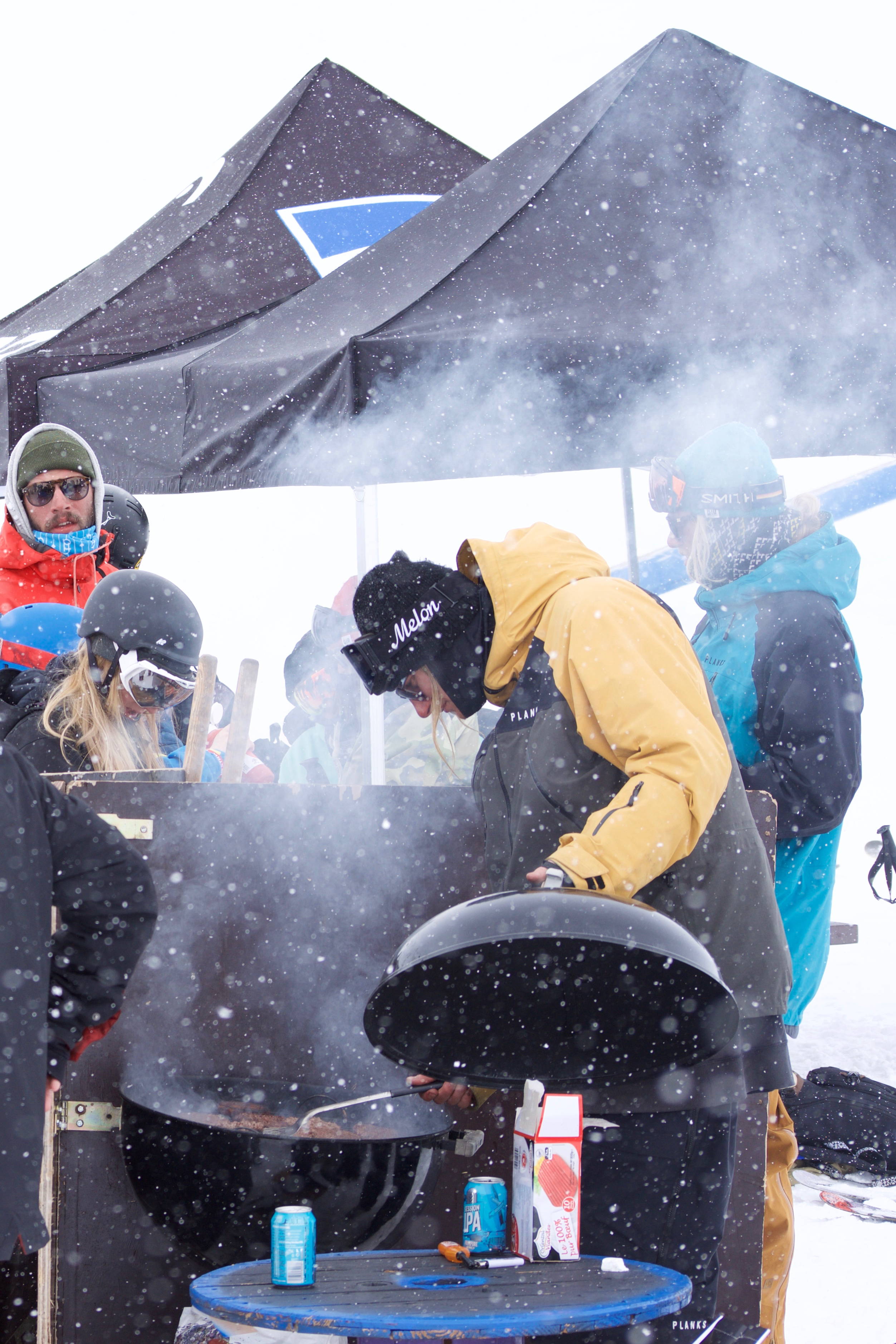 Once everyone was refuelled, we rounded up the troops and made our way towards the rail at the top of the park, where we would begin the jam session. The crew picked a feature that was suitable for beginners, but also had potential for those more experienced skiers to show off their rail game. People were once again attempting their first rails slides, while the more experienced competitors were pushing their personal boundaries to the next level. While the Planks crew displayed 360 swap combinations and much more, with Lupe showing everyone how low he could go with his tricks, keeping the style vibes alive. 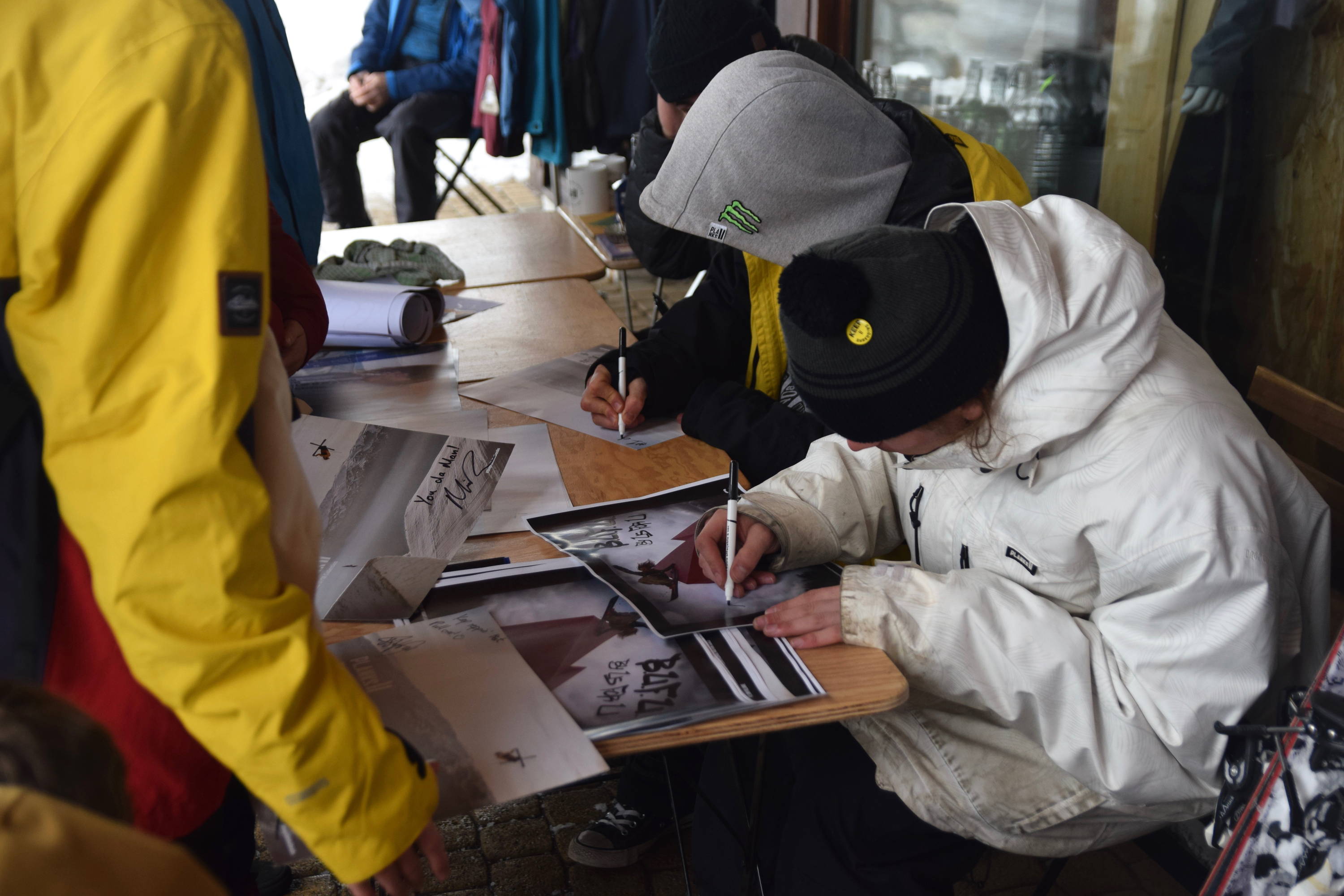 The boys on autograph duty | Photo credit to John Pratt

Afterwards everyone had a blast back down to Planks Clothing & Coffee in Val Claret, where we presented some awards and the athletes got a signing session underway, and what seemed like the whole of Tignes was swinging by to say hi. Then after a quick team apès, we headed off to Loop Bar for the after party… it went off, with everyone getting into their post-ski groove. 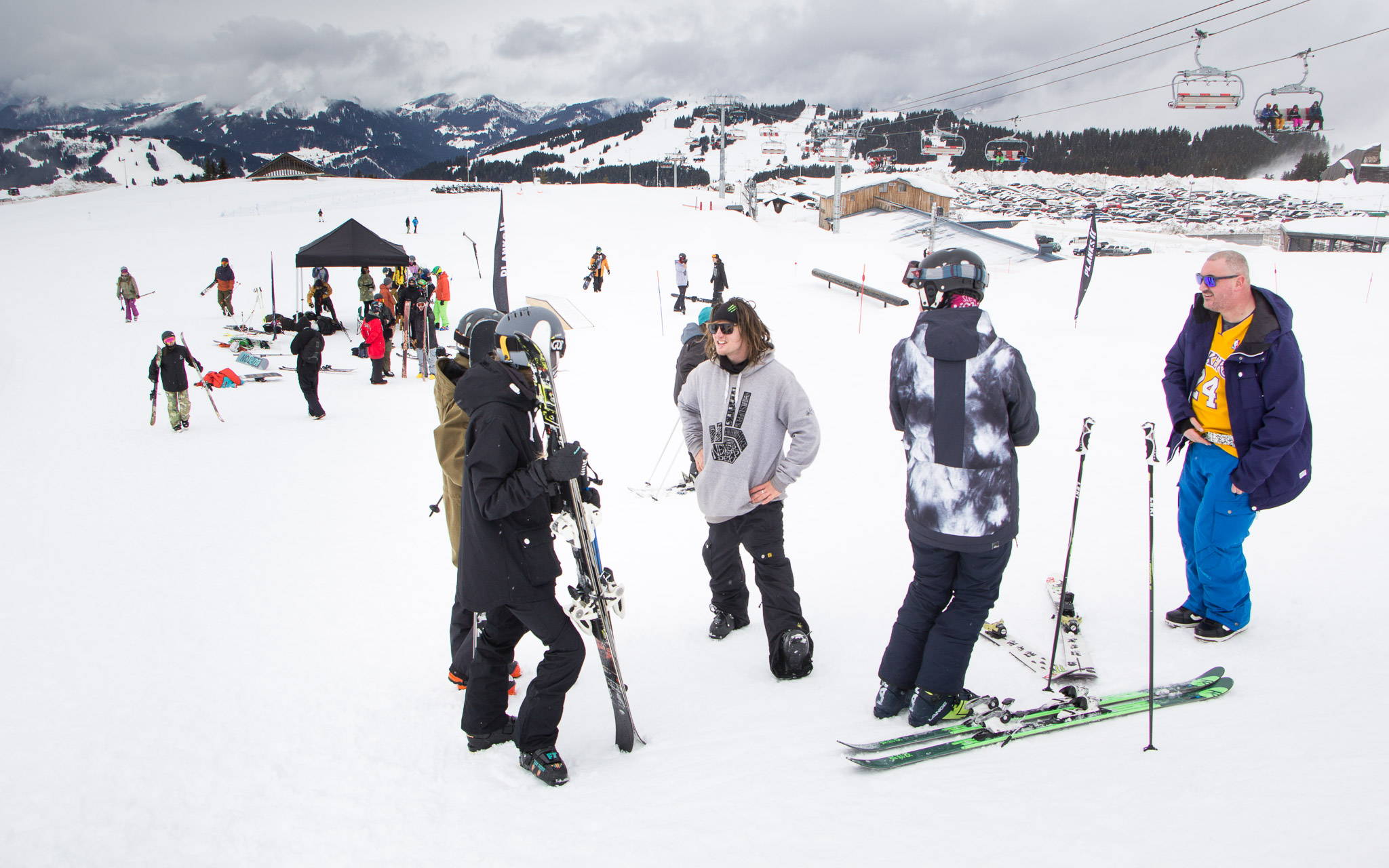 Last but not least we were in Morzine for the final stop of the tour, once again the weather didn’t play ball, but we certainly did! We kicked the day off with some more coaching, where a hand full of people landed new tricks or had their first freestyle experience in the park. 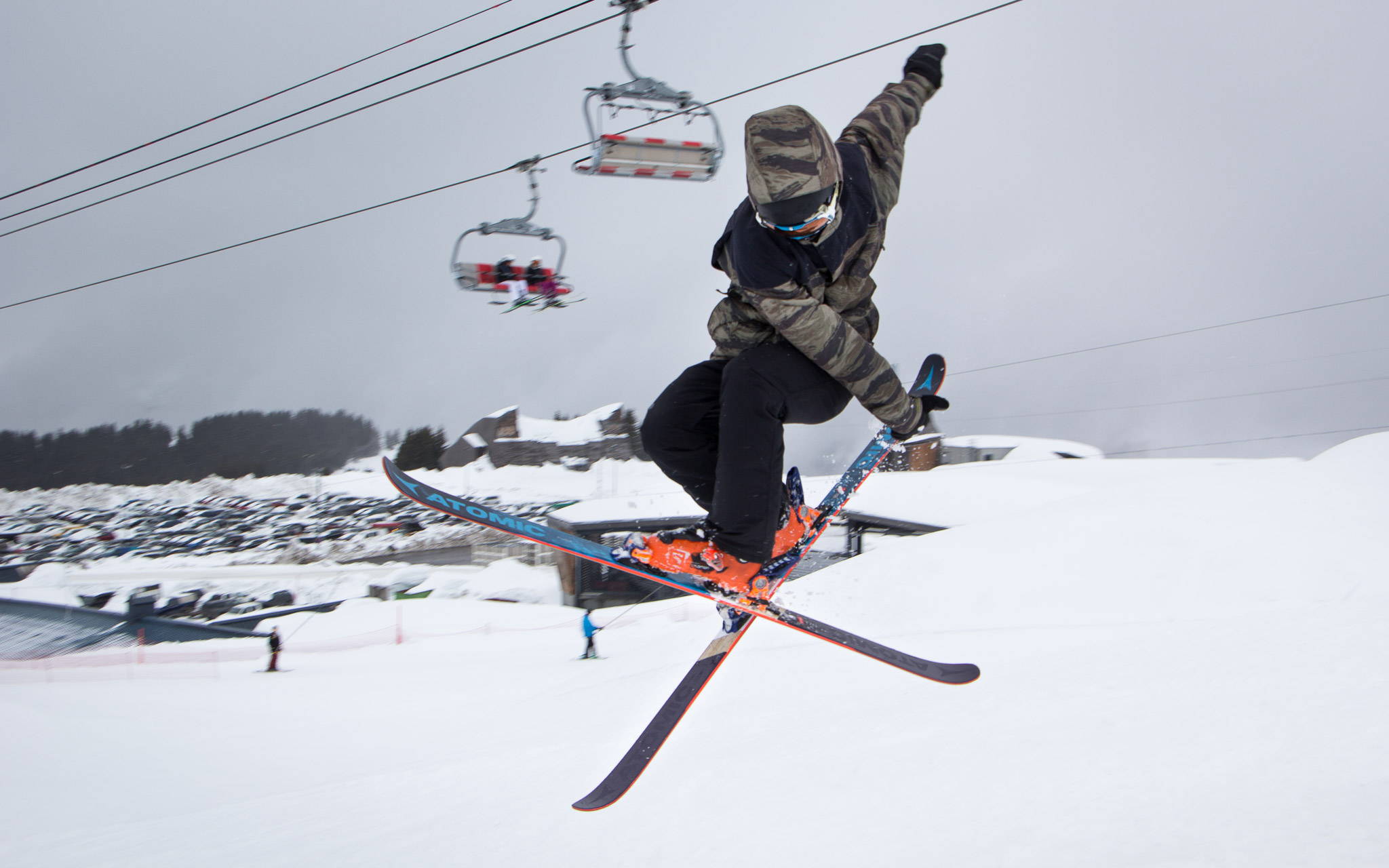 Edward Hallett clicking on his seatbelt | Photo credit to Tom

Following the coaching session we had the final jam session of the tour, where all kinds of ski wizardry followed. We ran this alongside Bro! Clothing’s Cocktails and Handrails jam which brought skiers and snowboarders alike to shred Chapelle park! Morzine displayed what was arguably the highest level of riding throughout the whole tour, so well done Morzine, you killed it! There were prizes thrown out, here, there and everywhere! What a way to wrap the tour up in style! 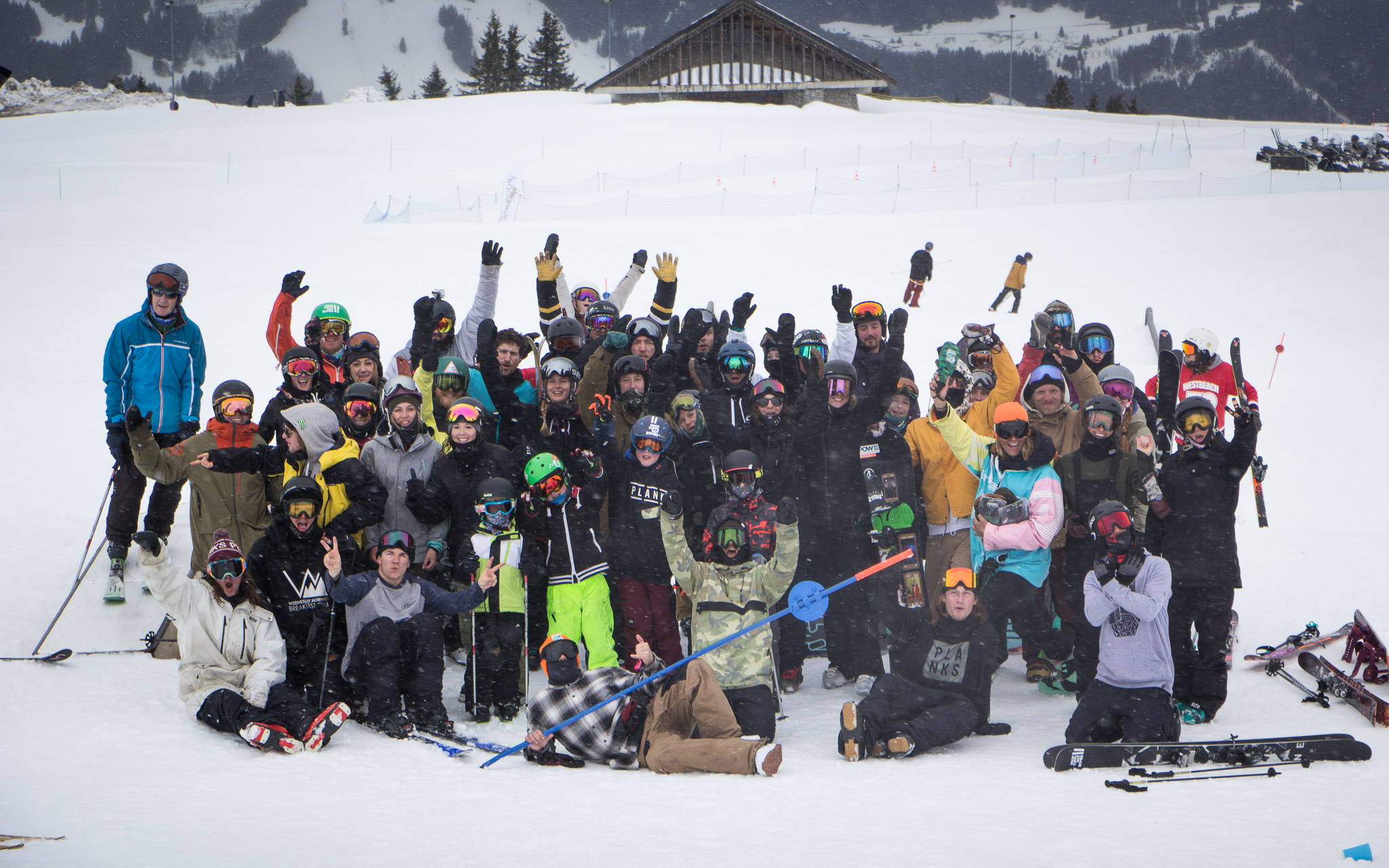 The next day the crew also made an appearance at the Morzine Film Awards, which they helped judge earlier in the week. Make sure you check out all the entries online, some awesome films and good laughs. Overall the tour was a huge success, everyone got involved, had a great time and showed us all what Planks Clothing and skiing is all about.

A huge thank you to all our partners and for helping us bring the the tour to the Alps!

Keep a close eye on our Facebook and Instagram pages for more images and videos to come! Bring on round two!